In Case You Missed It: Addressing Violent Crime in Washington, DC

In Case You Missed It…

Below are facts from Police Chief Cathy Lanier regarding violent crime in the city that were provided to the Council for the District of Columbia and members of the community.

Most major cities are experiencing similar problems with violent crime.

*But what the cities do have in common are:

From an August 2015 survey by the Major Cities Chiefs Association.

FRAMING THE CHALLENGES IN WASHINGTON, DC:

Release of Repeat Violent Offenders:  At a time when there is growing consensus about the need to modernize the criminal justice system – from policing, through sentencing, to incarceration – we cannot forget that our communities need to be protected from violent offenders.

In DC, we are seeing an increase in the number of repeat violent offenders involved in our shootings and homicides.  So far this year:

Synthetic Drugs:  Often referred to as synthetic marijuana, this drug is not at all like marijuana and the effects are very different.  It is an extremely dangerous drug and if not addressed federally, we will have a public health crisis on our hand as its use continues to expand. More and more cities are seeing increased violence associated with the drug.

In Washington, DC, we are already seeing the growing impact of the drug:

Centralization of Drug Units:  There are those who assert that the centralization of the drug units has led to an increase in violence; however, the evidence does not support that assertion.

Trends in Motives?  In terms of the “reasons” for or other identifiable similarities that may account for the increase in homicides, a glance at the known motives reveals an array of troubling reasons.  A common theme being individuals are choosing to settle arguments or disputes through extremely violent means.  (* = DOMESTIC)

*some of these motives may fall under more than one incident 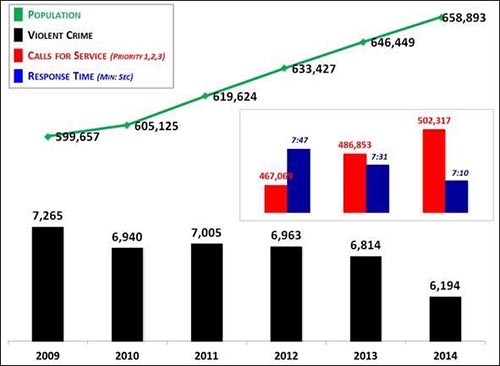 Homicides and Closures by District