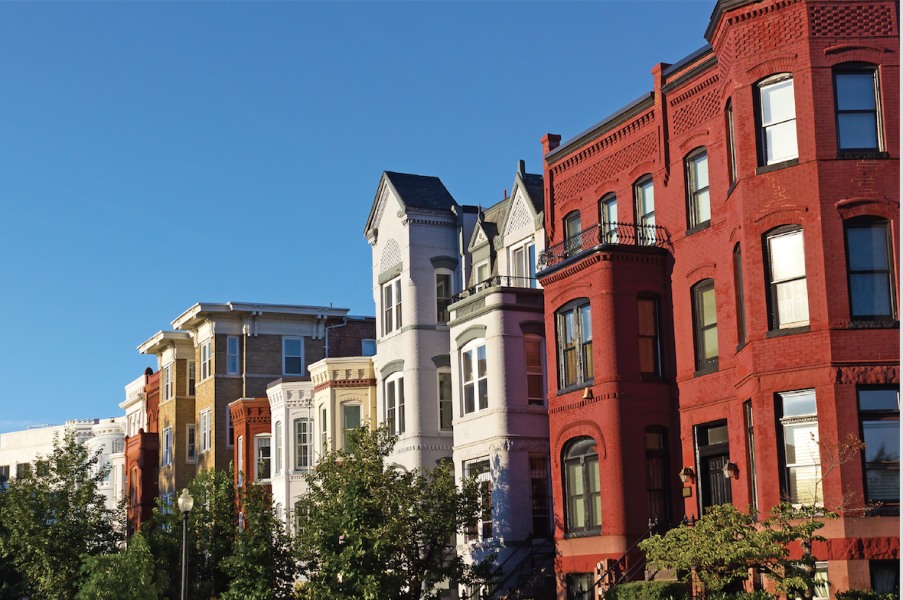 There is a lot of exciting activity happening in the Hill East neighborhood, and we want to ensure you have the information you need to plan and navigate as work ebbs and flows across multiple projects.

Delivering on her promise to close the DC General Family Shelter, in October 2018 Mayor Bowser locked the doors to the building, closing the shelter once and for all. In its place, Mayor Bowser is developing a new, dignified Short-term Family Housing program in all eight wards. To learn more about how the District safely closed the building while moving families into permanent housing, please visit the Department of Human Services’ storyboard.

In addition to closing DC General Family Shelter, the District has safely deconstructed two vacant buildings on the campus, Building 9 and Building 29, which had outlived their useful life. Throughout these milestone development projects, health and public safety services have continued to operate on the campus, providing residents access to services at CPEP, CSOSA, and Harriet Tubman Women’s Shelter, among others.

What has been completed since April?

In April, the District undertook campus wide upgrades to prepare for development activities. Two new parking lots were developed on the campus to support the needs of campus visitors and agency staff, and pedestrian safety and accessibility upgrades were installed. In July, DGS began interior deconstruction activities on the vacant Building 9 on the northeastern portion of the campus.

What is planned for next?

What will I see?

Residents and campus visitors will see construction safety fencing erected on the Western side of the campus near 19th Street, SE. Campus visitors will also see changes to parking options on campus, including new parking lots coming online on the southeast corner of the site.

Any street closures or transportation adjustments?

Since May 1, Massachusetts Avenue east of 19th Street through the Hill East campus has been closed. The road will be reconstructed and reopened as the Hill East master plan builds out. Traffic now accesses the Hill East campus via two new entry points: one at D Street SE through the parking lot adjacent to the DC Jail and one between C Street SE and Burke Street SE. Since May, WMATA Metrobus lines B2 and 96 have served the DC General campus from a relocated bus stop and bus shelter approximately 300 feet to the southeast of the former bus stop. The District and WMATA have been working to ensure that buses can safely and efficiently serve the campus through this new route. Access to the service road on the east side of campus remains unchanged. 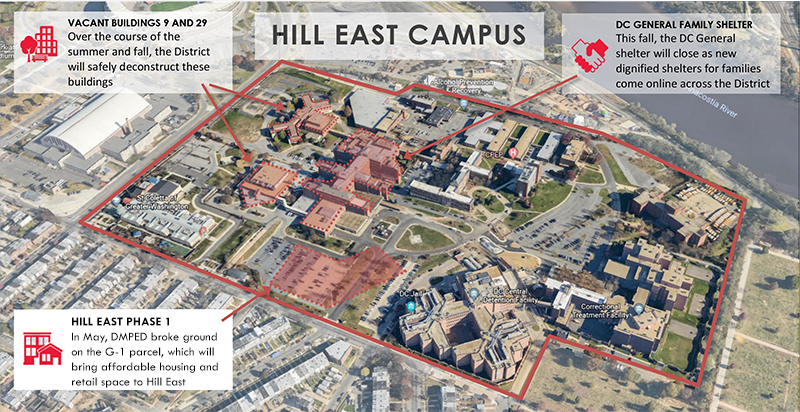 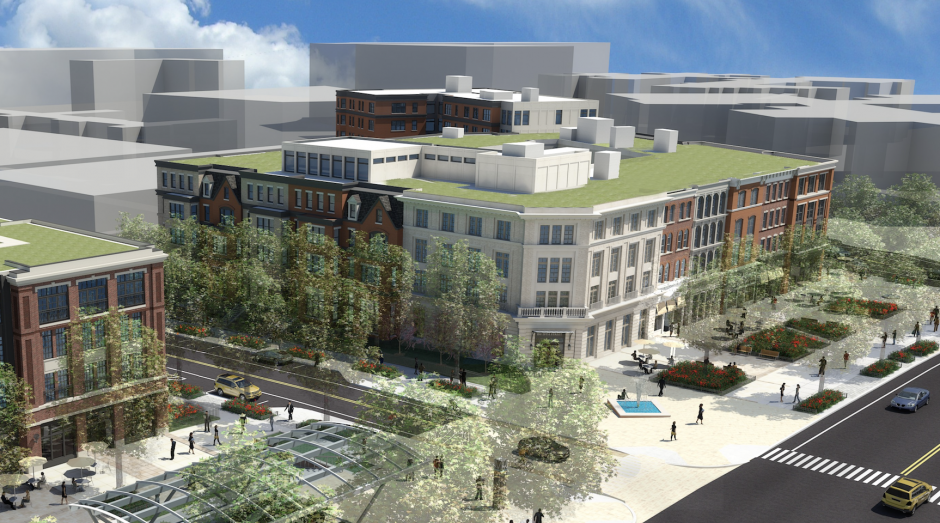 Hill East Phase I consists of two buildings totaling 353 units, including 106 affordable units, currently identified by their parcel designations, F-1 and G-1. The District is beginning with the larger of the two buildings on G-1, which will provide 262 rental units, approximately 12,000 SF of retail, 111 parking spaces and green frontage. The approximate construction cost of G-1 will be over $85 million.

The District Department of Transportation (DDOT) is responsible for constructing the public infrastructure necessary to support Phase 1 of the development, including roads, sidewalks, and utility infrastructure. The DDOT Phase 1 Infrastructure Project includes only segments of Burke Street SE, C Street SE, Massachusetts Avenue SE, and 20th Street SE. The project will also redesign the existing 19th Street SE between Massachusetts Avenue and Burke Street. No work will occur west of 19th Street.

What has been completed since April?

In April and May, the development team, working in cooperation with Washington Gas, constructed a new gas main to service both Phase I and existing properties on the campus. The developer has been excavating the G-1 site within the construction fencing. Additionally, the District and the developer have been installing temporary signage, repainting crosswalks, restriping parking lots, and adding sidewalks and ADA curb ramps to mitigate and minimize disruption to the residents, employees, and visitors to the Hill East campus.

What is planned next?

The developer will continue excavation of the G-1 parcel and, in mid-August the concrete contractor will begin to pour concrete.

DDOT’s road construction will begin in late August. The first phases of work include trenching, installation of pipes, installation of manholes, and other water, sewer, and sanitary sewer work on the new segments of Massachusetts Avenue, 20th Street, C Street, and Burke Street on the Hill East campus. All work will take place within fencing or concrete barriers, and DDOT is working with adjacent buildings to ensure that access is maintained.

What will I see?

A construction trailer is now located at the corner of 19th Street SE and D Street SE, north of the DC Jail. This trailer serves as the Project Field Office for the DDOT road construction project. Project management representatives are on-site during all work hours, generally Monday to Saturday from 7:00 a.m. to 7:00 p.m. The construction fencing that was erected surrounding the G-1 parcel will remain, and additional construction fencing and concrete Jersey barriers will be installed surrounding work areas. The developer’s work involves excavation and concrete pouring. DDOT’s road work in the first phase involves the installation of DC Water infrastructure and the rough grading of roadways. The District is requiring that trucks be washed down prior to leaving the site in order to mitigate dust.

Any street closures or transportation adjustments?

As with other projects in the District, Traffic Control Plans are adjusted as each new phase of construction begins. The District is coordinating the traffic control plans and commercial vehicle haul routes for all construction projects and campus stakeholders through an interagency working group for all of the projects occurring on the Hill East campus, and DC Government will continue working with stakeholders to ensure the safety and access for the Hill East community. Traffic now accesses the Hill East campus via two new entry points: one at D Street SE through the parking lot adjacent to the DC Jail and one between C Street SE and Burke Street SE. Once DDOT begins work on Burke Street, traffic will only be allowed on one half of the street; DDOT is actively coordinating with St. Coletta’s to ensure safe and efficient pick-up and drop-off of their students. Access to the service road on the east side of campus remains unchanged.

The Eastern Branch Boys & Girls Club (EBBGC) is a senior co-living community with 29 for-sale housing units that include 10 affordable units at 50 percent and 80 percent of Area Median Income (AMI). Approximately 80 percent of these affordable units will be two-bedroom units. The development plan includes a publicly accessible 1,850SF community space that will be programmed with continued community engagement.

The Office of the Deputy Mayor for Planning and Economic Development is currently negotiating the Land Disposition Agreement and other documents including the Ground Lease, Construction Use Covenant, Affordable Housing Covenant, etc. DMPED will continue to negotiate the project documents for a planned fourth quarter 2018 submission.